A Story of a Man with Dunning-Kruger Effect

One day in 1995, a large, healthy, middle-aged man robbed two banks in Pittsburgh in the middle of the day. He was not wearing a mask or any other disguise, and he was smiling as he looked at the security cameras before leaving each bank. Later that night, police apprehended a shaken criminal named MacArthur Wheeler. When he was shown the security footage, Wheeler was perplexed.

“But I put lemon juice on my face”, – he muttered.

Initially, Wheeler was considered an ordinary crazy criminal. He was even included in the 1996 World Almanac for being one of the dumbest criminals. But David Dunning, a professor of psychology at Cornell, and Justin Kruger, one of his graduate students, realized that this was a perfect example of a now common phenomenon known as the Dunning-Kruger effect.

What is the Dunning-Kruger effect?

Their first experiment divided participants into four groups to compare their self-esteem with their ability to understand logic, humor, and grammar. Based on the results obtained, they gave a graph below, which is true for different groups and different subjects. 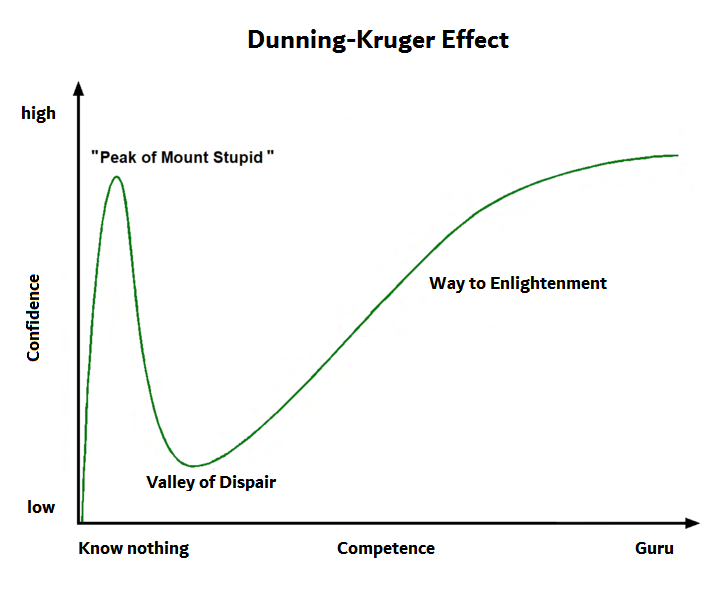 In the lower-left corner, a person’s competence is zero, as is their self-confidence. However, as a person learns a little about this subject, confidence increases significantly. As a person continues to learn the basics, their confidence reaches a maximum, as they consider themselves one of the few who understand the topic. This peak is often called the Mount of Stupidity. The problem, however, is that the more a person learns about a subject, the more they are able to see how complex it really is. As you can see on the chart, confidence is plummeting. A situation where skills increase and confidence decreases is called the Valley of Despair. Fortunately, confidence begins to grow, and the person climbs the slope of Enlightenment as they master the subject.

The Loudest is Usually Found on Mount of Stupidity

Unfortunately, those who speak the loudest often have the most confidence and the least competence. For example, “wise men” on both sides of the political spectrum spend hours talking about topics they don’t understand much about. They usually talk endlessly about science, economics, foreign policy, medicine and etc. What are the chances that they are experts in all of these fields, let alone at least one of them? Then how can they be so sure? Yes, they suffer from the Dunning-Kruger effect. Similarly, politicians like to present themselves as experts when they know very little. It’s also common on social media, where people share their ideas as if they’re experts. In fact, many of them have read only one or two articles, seen another user’s video, or viewed comments. They exchange apparently meaningless ideas, sometimes spreading potentially dangerous, incorrect information. On the other hand, more educated, the quieter. Those in the Valley of Despair feel like scammers. For some reason, despite the overwhelming evidence to the contrary, some of those who are on their way to mastering the subject feel that they are not really that educated. This is common among graduate students, as they experience high levels of depression, even if they know much more about the chosen field than the general population.

Society and the Anti-science Movement

Perhaps the biggest threat to society is the growing anti-science movement, which is fueled by the Dunning-Kruger effect. Those who are on the mountain of Stupidity have the most influence, often support candidates for anti-science organizations, intentionally or unintentionally spread false information. Because of this, public confidence in science is dangerously low.

According to the Pew Research Center: “As of 2019, only 35% of Americans trust scientists and believe that they act in the public interest”.

In a paper published in PLoS Biology, Peter Hortetz argues that over the past decade, many areas of science such as climate change, air pollution, evolution, and immunology have come under attack. Even the entire field of geology has been targeted, as it contradicts the belief of some that the Earth is only a few thousand years old, not 4.5 billion years old.

And how can a society function if so many people oppose basic science? Science makes society possible. Science gives us electricity, clean water, medicine and etc. Attacking science is akin to trying to destroy the modern world.